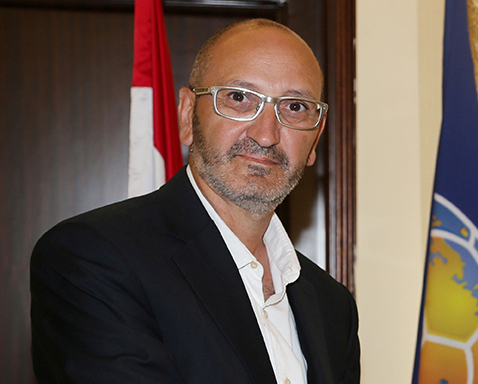 Bassam Turk has a Masters Degree in Economic and Social Administration (with a Minor in International Economy) and launched his career in banking, gaining experience from the Central Bank of Lebanon (financial markets), Allied Business Bank (treasury dept.) and Saradar Bank (international dept.).

A sports lover from day one, Bassam kicked off Sport Evasion in 1998.  As owner and Managing Director, he envisaged a firm that could offer targeted event management and sports tourism.  This is why Bassam became the exclusive agent of UCPA (a French governmental association specialized in sports tourism) which ultimately resulted in Sport Evasion winning the Tourism Trophy from the French-Lebanese Chamber of Commerce in September 2000.

Bassam is Sport Evasion’s head referee overlooking the creation of event concepts, the media exposure (before, during and after the event), arrangements for foreign athletes and event production and execution.  Focusing on Sport Evasion ever since it was established Bassam has scored numerous sampling campaigns, shop openings, entertainment, PR, parties, sports events, corporate events and launchings.  Under Bassam’s guidance, Sport Evasion organized over 50 events between 2000-2006 alone.  In his spare time you can catch Bassam doing all kinds of sports (especially outdoors), traveling, watching movies and TV and working as an elected member of Yahchouch’s city council (since 2010).  Bassam is the loving father of two and is Evelyne’s number one man.